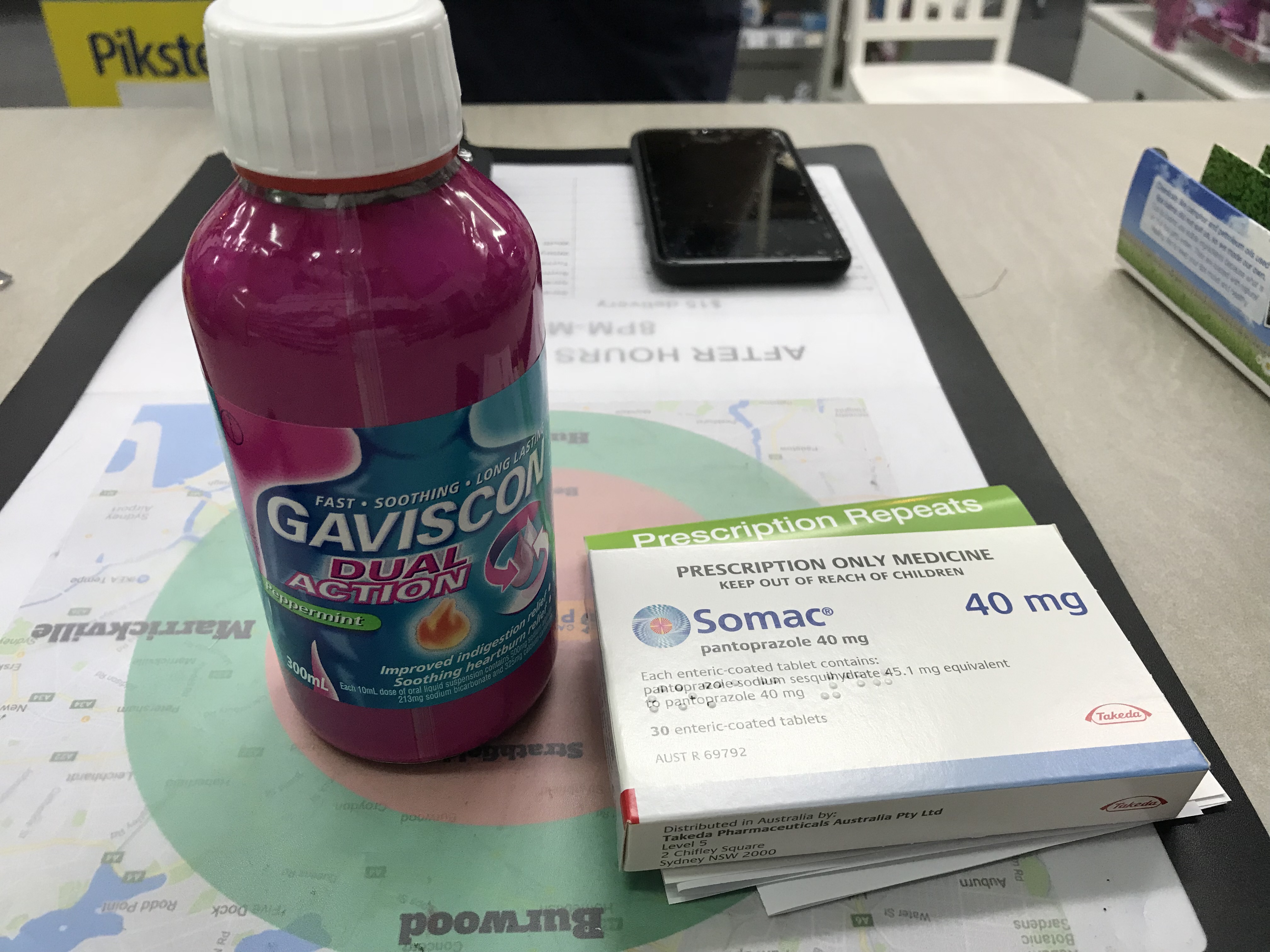 Today we had a customer with chest pains complaining that it wouldn’t go away..

Handing me two scripts: one for Gaviscon and another for Somac…I put on my detective hat and asked her about any history of stomach issues starting with the questions:

She appeared lean and told me she is super fit as in: plays soccer twice a week and gyms every other day.

At this stage it hasn’t quite clicked in my mind yet so I’m digging and digging…I really like solving puzzles like this…someone so young and fit shouldn’t be having symptoms that more often are seen in someone overweight and eats crap.

Now lets not get ahead of ourselves..the doctor has prescribed an antacid and a proton pump inhibitor (PPI). So there must be a diagnosis here…

So now I’m suggesting to her that perhaps it’s worth investigating for bacteria if her symptoms persist. In my mind I’m thinking perhaps it’s Helicobacter Pylori….but part of me is resisting the diagnosis. First because it’s too early..she’s only had persistent chest pain over the last three days…and secondly because she is so young and fit.

To reaffirm this thought…The customer interjects that she’s been on the diet and routine for ages and never has this occurred before.

I suddenly recall a condition called GERD ….not goat…but GERD: gastroeosophageal-reflux-disease. A mouthful I know! It’s basically when people suffer heart burn and chest pains for no apparent reason. Well actually the medical definition is the reflux of stomach contents up the food pipe thereby causing irritation and the physical symptoms of pain. Anyway I never really liked this diagnosis as the treatment always revolved around fluffy ideals like: stress less, lose weight, cut cigarettes, cut alcohol, cut spicy and fatty food. Heck this patient doesn’t have a problem with any of these!

But hang on, she does stress….stress in the physiological sense. She has been exerting herself in soccer matches and at the gym non stop basically….and GERD does have stress as one of the triggers. Still very fluffy but its in the definition……I hold that thought in mind…..

I loop around to the fact that she drinks coffee and ask her:

What time do you have it? (Timing is important see..) What do you know? She has it at 7.30AM-first thing in the morning BEFORE her Weet-bix; which by the way is my favourite breakfast cereal (with honey).

Suddenly I have a light bulb moment! Hang on….if she has coffee, it’s most likely to have gradually irritated her stomach lining to the point of inflaming it.

To test this hypothesis of mine, I ask her questions to see if there are OTHER signs of inflammation:

Do you suffer from break outs (aka acne) or cold sores ever?

Legit as soon as I said that I noticed what looked like a cold sore on the corner of her top lip. She says…YES! I have two cold sores, one right here as you can see (points) and three ulcers at any one time over the last few weeks!

I excitedly explain to her that despite her diet being on-point, the fact that she is under so much physical strain means perhaps her body is running a deficit of nutrients during those exact times….and as such is manifesting these symptoms in her mouth: ulcers and cold sores AND the stomach pain.

It makes sense when you think about the body’s fastest growing cells being those lining your stomach, and the skin in your mouth and hair on your head. Those undergoing chemo often lose their hair first and suffer terrible nausea as these cells are the most demanding in terms of nutrients and so if supply cannot keep with demand…you have problems.

if supply cannot keep up with demand…you have problems.

Before I get to what I finally recommended her lets touch on GERD….

GERD is represented by symptoms of

So to my final recommendation:

I told her to start a multi-vitamin.

Guess what: she just started one that day!

Good on her! I told her to continue that as the extra nutrients will act like a buffer especially during times of physical stress (soccer/gym).

Think of it this way: if the recommended dietary intake of Vitamin C is 75mg daily and she obtains this through her diet..fantastic. But what happens when you are training 7 days a week? You’re probably going to need more in reserve. Hence why I suggested she start that multi-vitamin, to increase her reserves.

Now Delivering to the Inner-West from $15