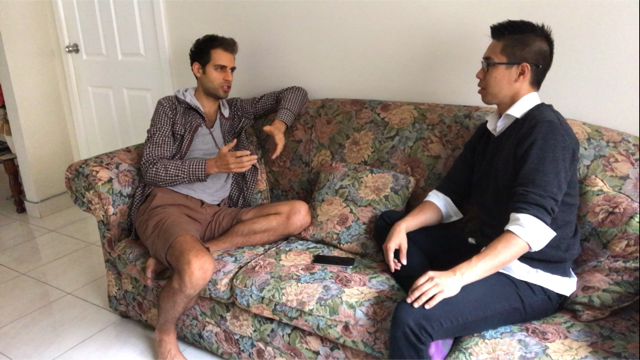 Have you ever suffered from stomach pains, gas, diarrhoea, or constipation? Chances are you have! And its just part of normal life. What’s not normal is if it’s recurring or consistently there.

One of the possible diagnoses for this condition is Irritable Bowel Sydnrome (IBS). I really hate this term because doctors (often, but not all) label you as having IBS and then send you on your way with no solid treatments or corrective actions. Often you’re left feeling clueless as to what’s next.

I think the reason IBS is challenging for both doctor and patient is that it’s unique to everyone. Much like your preference for Asian vs Mexican cuisine…your body has different constitutions which cause it to prefer one food group over another. So one person may eat chilli just fine but another will experience same-day diarrhoea.

Below is an interview I had with my neighbour, George who suffers from IBS.

Vien: When did health become a priority in your life?

George: Health has always been a part of my life….in high school I used to play volleyball, cricket, soccer….but I never really focused on the food aspect-it was always the physical training aspect. But as I grew older I realized that food contributes to up 80% of someone’s health. Physical exercise is not as important as what you put into your physical body

Back in 2011, I had a few stressful events in my life which in combination with the acne medications, I believe triggered my IBS. I can’t be certain but I think the acne medication, in particular, caused damage to my internal organs, including stomach lining. This led to me suffering chronic fatigue and all symptoms associated with Crohn’s and IBS.

Vien: Before you go futher, could you explain to the audience what IBS is?

George: IBS stands for Irritable Bowel Syndrome, basically inflammation in the gut. Inflammation can manifest as redness, irritation, itchiness [of the skin]. And as you may know, there is a link between the brain and gut, an open gateway [gut-brain axis], which is how chronic fatigue can be linked to gut issues. Other mental effects include emotional stress disturbances, mood changes, brain fog, etc…because of brain chemicals are being changed.

Vien: In pharmacy I often see mothers bring in their young child who is suffering from eczema or dermatitis. I like to point out that that is one form of inflammation. Inflammation is when there is some form of internal stress….manifesting (in this case) as itching, redness, swelling on the skin. George you’ve used these same words to describe IBS so how does that fit?

George: That’s right so in IBS the inflammation happens internally and the physical symptoms are that of diarrhoea or constipation. It’s a matter of finding out the the issue is and solving it in a manner that’s individual to your body.

Vien: Sounds like you’ve had [IBS] for a while

George: Yes, six years ago….ever since high school with me taking the anti-acne medications. I believe it caused my system to reach a hyper-active mode whereby I was getting all these symptoms…my natural skin pigment disappeared turning white, and so did my hair. Combined with a emotionally charged event in 2011, it was the catalyst for the IBS..

I was determined to heal myself and not go down the supplementation or drug route because I think the drugs were the root cause.

Vien: You began this journey at a young age…were there any mentors or people that helped you along the way?

George: Initially I did my own Google research and read medical journals and followed this with opinions from specialists. I realized that in fact there was a gap in our medical knowledge regarding IBS and so different people were giving me sometimes contradicting advice. It was at this point that I began to dig and dig…I had questions I needed to answer such as: “Is this stress-related?” or “Is this food-related?”

Vien: Can you name the different people you saw?

George: I saw my GP, gastroenterologist, neurosurgeon…everyone had their own 2 cents. I then came across the concept of natural healing which involves eating natural, organic, plant-based foods.

Being an extreme-type personality I quit animal products straight away and went raw vegan for 9 months. How I did it was I would do a mono-diet of a single type of food for many months at a time such as bananas for 3 months…theory being that it would retrain my stomach to recognize and consistently produce the right amounts of [stomach] acid and enzymes to match the meal. Because one of the symptoms of IBS is that your body doesn’t digest the food properly leading to gas, diarrhoea, and constipation. The need to go extreme was because of my desire to fix each issue step-by-step. The goal being to achieve regular bowel movements.

I had also researched supplementation and tried medications. One medication being Nexium which after two weeks stopped working, and so the focus was back on natural therapies. Supplementation-wise I couldn’t really find anything-if it did exist I would have tried it. As an IBS sufferer, you’d go to great lengths to just ease the pain and lead a normal lifestyle.

Going out with friends becomes difficult with IBS because you have to be careful with what you eat and the embarrassment of needing a bathroom all the time. My biggest issue however is that I don’t trust how chefs prepare my food. You don’t know what oils they are using…sunflower oil, olive oil, palm oil-it’s all processed ingredients. When I prepare meals today I don’t use any oils. I haven’t for four years. So the question is, do I go out and enjoy that social aspect of eating and deal with the consequences of pain or do I just stay home. Some will think that’s being anti-social but I think it’s just being as healthy as you can for yourself.

Vien: You just something interesting before, you said that if you correct your eating habits early, you can prevent IBS from ever happening. And secondly that once you get IBS you CAN rid yourself of it?

George: That’s speaking from my own experience. Gaining and staying in remission is very, very hard and I think I’ve mastered it now compared to four or five years ago. I also know for a fact that if I consume products with trans-fats or is high in protein that my body will go into defensive mode and I will trigger the IBS symptoms.

Vien: How long do the symptoms last before you achieve remission?

George: It really depends…usually if I eat a known trigger food then as soon as it hits my stomach, and the acids start to digest the food, I feel it [symptoms] straight away. Then it [the food] takes about 24hrs to pass [through the body] and within about 48hrs I have a few symptoms. Knowing this if I eat clean food immediately this usually allows my body to handle the issue. So for me I just eat clean 24/7.

Vien: Do you know the practice of fasting?

George: Yes I started about two years ago but I didn’t really know what I was doing..

Vien: Isn’t fasting just fasting? Is there a technique to it?

George: There are so many techniques to fasting…There’s intermittent fasting which is all the rage these days..but I do what’s called a water fast. I like to do things to the extreme so I would drink water only for ten days and not consume any food. But before I do anything I do my research.

Vien: I’m so glad you said that because everybody’s different. Beware and do your homework first.

George: My thinking for the fast is this: if I want outcome X then I need to do Y. So if I fast for ten days I would give my body enough time to rid toxins that have built up over the years. It would also mean I don’t add further toxins in the mean time. The first two days are really tough-your brain is sending hunger signals…all the while your glycogen [sugar stores] are going up and down. By the third day your body goes into ketosis whereby your body taps into fat stores for fuel. Since toxins can be stored for a long time in fat, my burning of this fat would slowly rid me of the toxins. At day six or seven I was feeling great, I was waking up refreshed. Finally day 10 came and I was ready to eat. I received a distinct signal for true hunger.

Vien: I’m trying to imagine how you looked by the end of it. Were your eyes sunken or…

George: No no…honestly I did lose a lot of weight. I lost a lot of water weight and about 2 kilos of body fat so that’s 3-3.5% body fat..which is pretty good.

George: So after the fast I re-introduced foods back in slowly so as to not shock the system..I started with drinking juices…apples, celery, kale, just greens. After five days of this I started on whole foods again. I think this was the final step towards healing myself and getting remission.

This site uses Akismet to reduce spam. Learn how your comment data is processed.